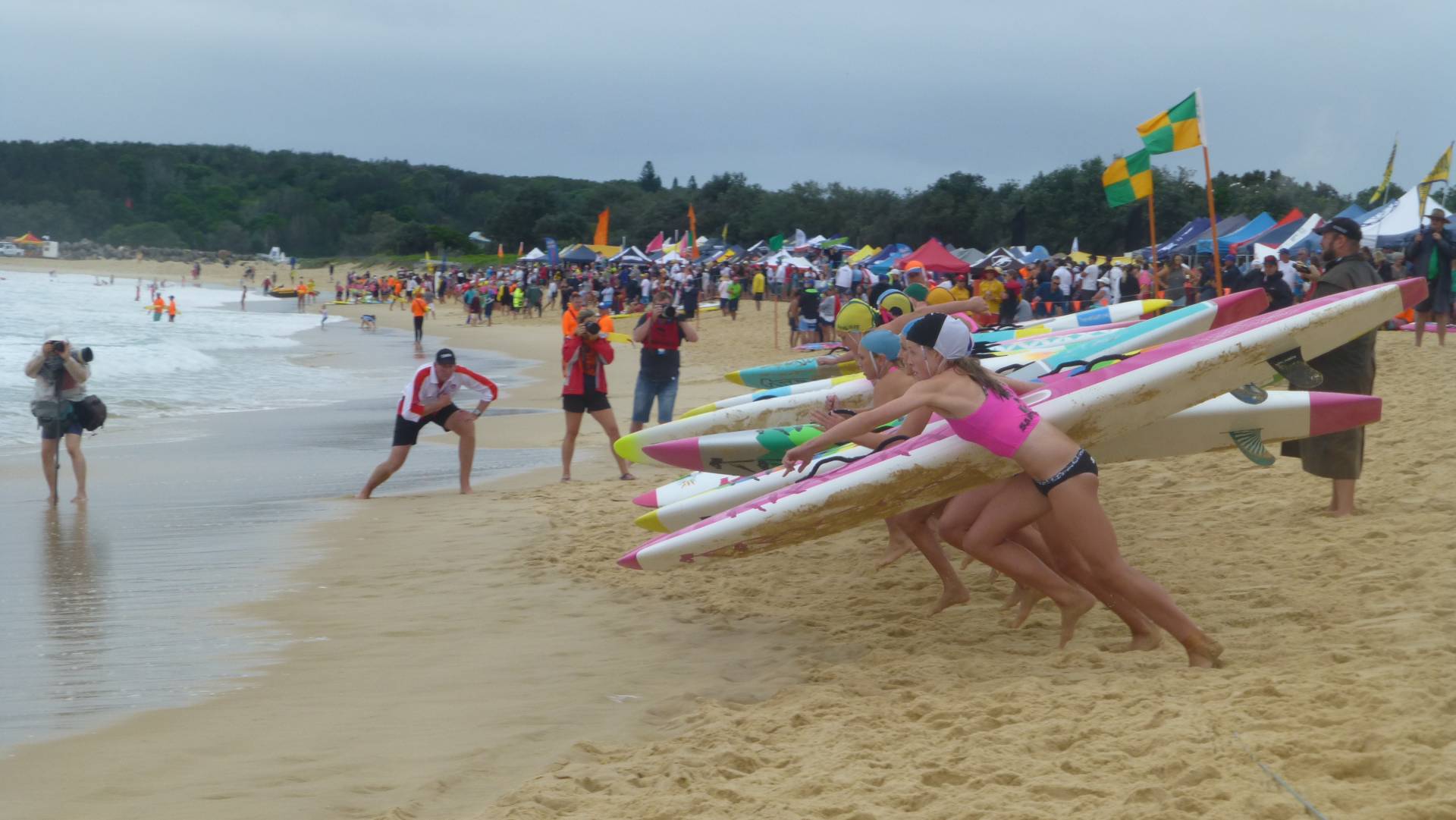 ‘To assist competitors to achieve their goals by providing consistent high quality coaching, and to foster participation in surf sports for the benefit of Sawtell SLSC  and Surf Life Saving.’

The new carnival/competition calendar (Juniors, Seniors & Masters) for the 2016/7 season can be found here:

Club: Club championships are held at Sawtell – points scored for each individual in an Age Group are combined over water and beach. To be eligible to win an age group or open, you must compete in at least one water event.  Last year it was the swim.

Due to carnival date availability there may only be one carnival for selection and this will be decided by the Branch Surf Sports committee.  Therefore, club and branch calendars need to be checked.

Selection for both juniors and seniors will be based on a point score system as follows:-

These points are applicable for each individual discipline.

In previous years, 2 water and 1 beach competitor male and female were chosen from each age group, from the under 12’s through to open competitors.

They must be proficient and if applicable have the required patrol hours completed.

If a competitor is unable to attend the selection carnivals then a request can be submitted in writing to the branch giving the reason why they are unavailable and why they should be considered. This will be considered by the competition committee.

These points are totalled for each discipline, water and beach together (swim, board, ironperson, ski, sprints, flags).

The open male and female branch champion can ONLY be awarded to an open competitor between the age of 19 and 29. They must be proficient and have the required patrol hours completed to be eligible.

Country:  Usually held early in the year at varying locations.   In 2016 and 2017 it was held at South West Rocks in early February.  It is a very important carnival for our country club, and Sawtell placed second overall in 2017 – our best ranking yet.  There are multiple events with lots of team events. This is a 2/3 day carnival and any competition-eligible member may participate from U8 and up.  Accommodation can be difficult to source – it pays to book early.

State: A 2-week carnival, although it is broken up into various categories with the Age Championships category being conducted over 3 days.   In 2017 it is being held at Swansea/Belmont SLSC.  Accommodation can be difficult to source – it pays to book early.  Maximum attendance is encouraged at this carnival.  At time of writing, Sawtell juniors managed to achieve sufficient points to achieve 14th place in more than 50 Clubs, making Sawtell the top Country Club for NSW.

Aussies: The Australian Titles.  For Seniors, events are from Thursday to Sunday.  There are celebration functions on Sunday night and “Mad Monday.”  We recommend arrival no later than the Tuesday before the carnival.  Accommodation can be scarce, depending on the location.  In 2017 it is being held at North Kirra.

Manly/Freshwater: Traditionally very large carnivals held on Australia Day at Freshwater and the weekend before at Manly.

Academy: North Coast Academy of Sport is a body dedicated to the advancement of athletes in their chosen sports.  It is intended to bring logistical and coaching information support together in an environment of like-minded persons.  It is open to athletes between 16 and 19 years, although there has been some flexibility in the past based on merit.

Athletes are nominated by their branches, and a panel of coaches make the final selections.  Selected athletes attend 3 camps in October, January and June/July, as well as various R.A.C.E meetings.

Other Carnivals: Some competitors may elect to go to Queensland for the “Coolangatta Gold.”  This is an endurance event for open male/female and U19 male and teams.  It is early in the season and the training needs to be specific through the winter.

Their main series is the “E-Toll” Assault series, which is spread over several carnivals with a final series. Remember if you compete out of branch/state you require signatures from branch /state to go with your entry.

The Club Policy on Carnival Entry Fees can be found in the Club Member Area Policies. If you have any question please contact the Club Competition Manager ……………………………..

We have several tents that are used on the beach at each carnival.  If we have large numbers then umbrellas are a good idea.  We try to stick together as a team on the day.  Club skis and boards are available and will either be brought by the Team Manager if we have sufficient numbers, or lent to individuals.  We have some competition-ready skis and competition boards.

The selection committee will be made up of the club coach, competition captain and three people appointed by the committee.  These people by preference should be committee members or masters competitors for teams events who have first hand knowledge not just hear say.

Teams will be chosen prior to carnival time and not on the day for all major carnivals i.e. Country, State, Aussies, etc.

If selections are made and finalised prior to final entry dates for major carnivals, it may mean fewer issues at the carnival.

The selection committee may deem it beneficial for the club and the entire team’s result to select a team with younger competitors competing up in older age brackets rather than their own age group for the best possible result.  If an under 14 male or female is chosen in an older age group team event their priority is with the under 14 team event first before any other age group.

This takes place at 16.30 every Wednesday and 09.00 every Saturday at Coffs Jetty.

Senior Training
Please note that the training programme is subject to change.

Masters training for Sawtell is held regularly throughout the season.  This is open to anyone over the age of 30 who is interested in training and/or competing in the masters events at carnivals.  It’s a great way to keep fit and occupy your time, especially while the kids are training.

Regular schedule for Masters training is as follows:

Jetty sessions include some Ski training/coaching.

USE OF CLUB EQUIPMENT FOR TRAINING

Skis- In order to preserve our skis, access is limited to persons authorised by the club captain, competition captain, or coaches.

Boards-  boards are locked in the lower storeroom.  These can only be accessed by request as above.